A few months ago, I attended a business conference and one of the presenters, a videographer, told a story about filming in a small village whose name I can’t pronounce nor remember. She asked the women what would make life easier for them in that remote village and they said, “A donkey.”

At first she was surprised at such a simple request, but they explained how a donkey would help them till the soil and then carry their produce to market. There were other reasons as to why a donkey would make such a difference in their day-to-day existence so they organized a means to get the village women their donkey.

That talk, in reference to setting up a business and figuring out our needs, made quite an impression on me and it got me to thinking. What’s my donkey?

In my stand-off with RA, there are several inflammation markers I keep track of. As far as I remember, my sed rate has been normal or close to normal. (I am now the proud owner of my medical history for the last nine years. I asked and I received a CD of my chart. I will peruse later.)

The other marker, the one that more closely reflects how I feel physically, is my CRP. That has spiked more often than not over the years. Last fall I was feeling a little crappy and sure enough my CRP was 16. At last month’s visit it was nine. When it’s close to normal (4.9 or less) I feel terrific. Nine is good, awful good.

When my CRP is normal or near normal, I feel 20 years younger and just as spry. A while back we had to replace the water filter on our fridge and without even thinking, I went into a full squat, my tush almost raking the floor by my feet. My husband stood by my side, confident that I could not dislodge the filter from the bottom of the fridge without his muscles.

This is a man who road and mountain bikes, surfs (when there’s a swell, he once got kicked out of a surf spot because he was catching all the good waves. He’s used to Pacific Ocean swells; the Atlantic doesn’t quite cut it) and is younger than me. Since he was annoying me, I ignored him until he cried out, “I can’t do that! Squat like you’re doing now.”

I pressed on the end of the filter and it popped into my hand. I stood up, coolly handed it to him, then left him there, transfixed, with his mouth hanging open. This is also a man who had seen me at my worst, when I thought the fight with RA was lost or would be.

And the continued flexibility to do full squats whenever I darn well feel like it. 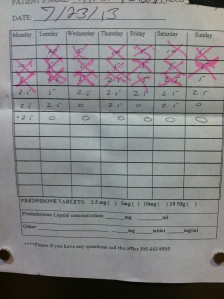 My doctor is so conscientious. He made out this steroid wean sheet for me on my last visit. I’m making my way to Day Zero.

As I slowly say goodbye to my frenemy, Prednisone, my body is realizing something’s up.

This is a for-keeps kind of thing. I suppose it needs time to adjust. And it has started sending me signals, namely via hands and ankles.

Since I have a sore right thumb, I’ve taken to Ace-wrapping it, and of course my hand, for the night. Two mornings ago I woke up with a very painful left hand, but my right was A-OK.

I thought nothing of it, unwrapped my hand and got up to meet my day. I massaged my left hand at intervals and it took several hours for the pain and stiffness to go away. RA’s signature.

At the end of the day it hit me. Warmth. I’d kept my right hand warm encased in its Ace wrap all night. There was visible swelling along the base of the metacarpals, a definite RA calling card. But, it didn’t hurt and it didn’t affect my mobility.

Aha! I thought. What took me so long to figure that out? Nurse heal thyself. 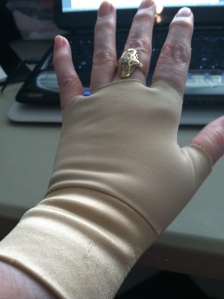 I’ve had these gloves for many years and they still give my hands and wrists great support when I sew or quilt.

Since I was already in bed when the revelation hit me and my other Ace wrap had been left in my office, I opened my bedside drawer and grabbed my sewing glove.

It would have to do.

This morning my hands felt equal. A little stiff, a little swollen, but barely sore. And most importantly, functional.

And what makes me feel warm all over? 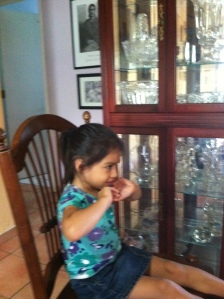 Blowing on her nails after Na did them. Another reason I need agile hands. To give my baby her manicures!

I conducted an experiment on myself. My main objective was to satisfy a childhood craving, and secondarily, to see if what I’d read was true, at least in my case.

Growing up, I never went hungry, though there wasn’t a lot to choose from in the cupboard or refrigerator. The one cereal we usually had on hand was corn flakes. Sometimes a bowl of cereal would be my breakfast, sometimes my dinner. With just a bit of milk, it hit the spot.

In my own kitchen, there lived a great assortment of cereals. Every kid had their own wish list, it seemed, though I still stuck to my favorite. But, as my nest was emptying so were the cupboards of that crunchy stuff. Soon, there was barely any cereal to be found in my home.

It was during this gradual exodus of children and foodstuffs that I became so ill I ended up having to give myself Humira injections with hands that couldn’t even close around a steering wheel. After several years of this, and seeing no improvement, I stopped. I decided I would accept the Methotrexate, and the Prednisone if needed. But, I would concentrate on exercise and I would study food.

I began keeping a notebook with lists of different foods and their benefits, or deficits, regarding inflammatory conditions. I learned that strawberries and chocolate were good for me and corn wasn’t. I avoided processed foods due to the corn syrup used in them, but my main reason for doing so was to control and maintain my weight. I still had the occasional popcorn at the movies, or the rare corn on the cob. Corn flakes, though, never entered my mind.

Then about two months ago, the craving hit. I ignored it until one day while walking through the grocery store, my cart made its way into the cereal aisle and stopped. I scanned the never-ending sea of cereal boxes looking for the corn flakes. I found them relegated to the bottom shelf; not even rating eye-level placement. I pondered for a while and then made my decision. A 12-ounce box was soon joined by a quart of 2% milk, another item that had been absent from my home for years.

After that first box, a second one followed. Instead of my usual bagel or a couple of scrambled eggs, I would shake some flakes into a bowl for breakfast. What could be easier? And if my husband wasn’t going to be home for dinner, well, there were the corn flakes. Why cook for just one?

Soon, my hands began to feel achy in the mornings. And then they began to be painful. They felt as if someone had pumped air beneath my skin. They didn’t look blown up yet, but they felt like it. Added to that, I felt stiff and achy in general.

I dumped the, by then, large-sized box of corn flakes into the trash. Within a week or so, my craving was gone and so were my overall achiness and swelling of the hands. I felt more energetic and my outlook brightened again. It always goes dark when pain and immobility first hits.

But now, I’m back to “normal” again, and I’m left wondering; was it the overdose of cornflakes?  Was it the newly added dairy to my diet? Or was it all merely coincidental with a flare? There are too many variables to come to a definite conclusion, but of one thing I’m sure: They sure did taste good.