This past Saturday morning I wanted nothing more than to snuggle deeper into the covers and stay there. After a month of early rising and little sleep, I wanted to remain in my cocoon and hide from the world.

The very idea of rising to shower, dress and leave the house when there were no appointments to go to seemed like a punishment I didn’t deserve. But my daughter-in-law had put me on notice.

While we were all consumed with being at the hospital, she quietly took over the care and feeding of the troops, including the out-of-towners. And she paid special care and attention to my granddaughter.  We didn’t know what to tell her, she being only six. My first impulse was to protect her and tell her nothing. But how to explain the sudden disappearance of her beloved Pa?

I made a mental note to do something for her, someday, when I was not so tired, but she got ahead of me. She was taking me out to lunch and a massage she said. And though I reluctantly got out of bed and left the house that morning, leaving my son at home with his dad, I felt a little lighter by the time we made it to the corner a block away.

It turned out to be the right medicine for me. To move away, just far enough, just long enough to breathe free air.

We enjoyed a leisurely lunch of specialty pizza with a lot of much-needed sangria. And afterwards we walked down blistering hot streets to the massage place. Even the boiling sun felt good.

The massage hurt, though I’d asked for light to medium pressure to be applied. Too many tense and knotted muscles in my back. Later when we compared notes, I found out that her massage had hurt too, for the same reason.

Nonetheless, it was a good experience. The dim lighting, the gentle, soothing voice of the masseuse and her otherwise healing touch, the sense of letting go and just allowing myself to be was something I hadn’t realized how much I needed until that moment.

Now I have something else to be grateful to her for. And I still need to come up with something to do for her. 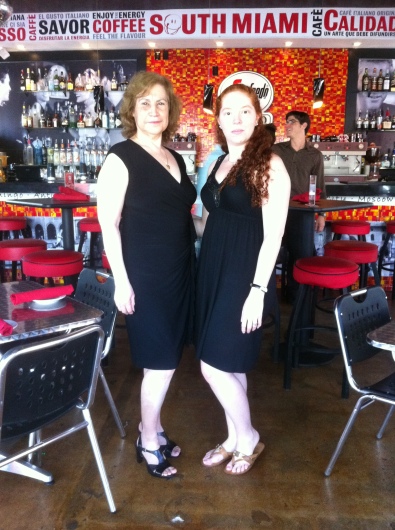 Us, a few Mother’s Days ago.