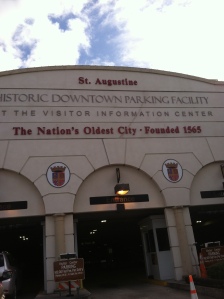 I was lucky to spend this past weekend in St. Augustine, Florida, this being the year of its 450th anniversary. Right when we got there, we were confronted with how beautiful it all was.

We’d already seen the remarkable ocean view from our room. The sound of the waves hitting the beach was soothing and addictive. We didn’t want to leave the cozy room, but we also wanted to see the city.

So we headed out and our first stop was the Castillo de San Marcos. Built in the late 1600s, it took the Spanish 23 years to build the fort, out of basically solid rock.

I can imagine their determination and their faith

in what they were doing so far from home in a place
they called Florida (flowery).

It didn’t take long for the sailor I married to note that the corners of the fort were shaped like the prow of a ship, with even a “figurehead” at the top.

The top of the fort was laid out with cannon after cannon. Some of them carved with intricate designs. I wondered what must have gone through the ancient artisan’s mind while he adorned a killing machine so beautifully.

It seemed a shame to have cannons pointed at such a pristine inlet. But I guess that was the point, to keep it serene and beautiful. To keep it theirs, though that did not happen to be the case after all. 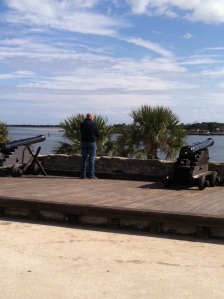 Regardless, their attention to detail was amazing, from the curves of their rooms made of solid stone to the sharp, well-defined angles of the outer walls.

And I suppose in testament to their faith, the doors to the chapel were centered within the courtyard, easily accessible to all in a moment of need.

We walked the grounds of this fort knowing that it was very possible one of our very own ancestors had walked here way back when. On impulse, I took a picture of my feet upon those grounds.

For this trip, I packed my sense of wonder, my imagination and my energy. The one thing I didn’t pack was my RA.

2 thoughts on “The One Thing I didn’t Pack”