The beast has been tamed. Though not altogether vanquished, its growls have been reduced to whimpers.

I had a total of four physical therapy sessions that boiled downed to learning some exercises to strengthen the muscles of my legs and limit pressure on the sciatic nerve itself. They all happened before I flew to Los Angeles exactly three weeks ago, a five-hour plane ride that I was dreading, and which dread spurred me to hurry up and do something!

The flights were not fun, there and back, but were thankfully direct so were over and done with as quickly as humanly possible. Aisle seats helped a lot as I didn’t have to maneuver that tiny space between seat rows.

Sitting hurt, but standing up hurt worse. At least, for that first step or two. I managed to get through the four days we were there fairly well. The ache a dull roar down my leg. But I’m very glad we went because we got to see my father-in-law in good spirits, and albeit with a cane, walking better than I was.

I held off taking Prednisone during the trip, but after flying back on a redeye, and with the three-hour time difference, the jet lag threatened to bury me. So I caved and did a six-day hit (20, 20, 10, 10, 5, 5 mg). That did the trick and also soothed away the egregious pain, for the most part.

I remain quite conscious of that leg, or that nerve, I should say. I turn over in bed with great caution. The wrong move sent an electrifying jolt down my leg and left a painful residue behind. For hours and sometimes for the whole rest of the day or night.

I’m careful not to sit too long either, which kind of puts a kink in the works since I work sitting down. I keep hearing my PCP’s admonition as he scribbled away on his Rx pad, “Don’t sit!”

This has also put my home downsizing project on hold. No more climbing the stepladder, no more lifting heavy books, no more pushing furniture around. Now I look at our record collection longingly. Yes, vinyl records, about 200 or more taking up space. They need to go into another room where I can’t see them anymore, as I’m not allowed to get rid of them. I guess I could carry them there one by one. Two by two.

Since I couldn’t sit and I couldn’t lift, I turned to culling my photo collection, and framing some of my more treasured moments. This fun trip down my personal memory lane was facilitated by using my cutting table as a work area. It’s high enough that I can stand and cut out countless quilt pieces without incurring miserable lower back pain.

I have not returned to PT, though they’ve been calling me. I don’t see the need. I should probably tell them that. I think I derived enough from those sessions to basically practice prophylaxis and prevent another attack of sciatica in future.

Still, I thought more info wouldn’t hurt so I bought a book last night. It’s written by a sciatica sufferer and at a whopping $4.99 for an eBook, I expected a lot more than I got. True, clinically, I realized I would know quite a bit, but at the very least I expected something that couldn’t be read in one sitting. What was even more disappointing is that it could have used some editing and a whole lot of proofreading. It feels like I threw my money away, but I guess, caveat emptor.

Though my screaming leg has shushed, I remain vigilant. And for now on standby, with a bag mentally packed. We have received word that my father-in-law is failing. He has battled multiple myeloma for several years and it appears his time is near. 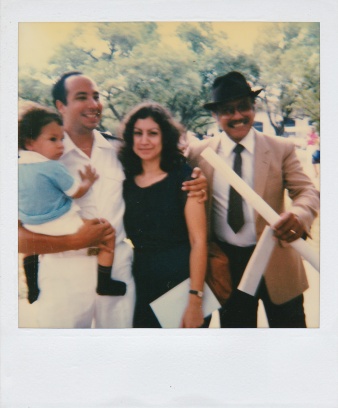 Big Al with us at my husband’s graduation from Texas A&M Maritime Academy. A long, long time ago.